Over the past few years, I'd had a few chances to hop various Kawasaki KLR 650's for an hour or so, although usually only on pavement. Only on recent riding research projects for our new "Best of Northern Patagonia" tour did I finally have the chance to ride the KLR to such an extent that I feel prepared to share my opinion about this motorcycle.

First, please make note of the title this article as the word "Value" will be important to consider as I report on whether the KLR is the best adventure bike. When you consider the purchase price, parts prices, service options, global network that surrounds the KLR, and the way it performs, I don't think there's a better value in the adventure riding world. Let's look at some key categories:

Size, Stature & Capability: With full riding gear & full backpack, I'm about a 6'3" - 270lb rider, yet after multiple days on the KLR, never felt cramped or confined. (Granted, I do have shortish legs, only a 32" inseam.) The KLR is neither big or small, but perhaps the perfect mid-sized adventure bike that we frequently see couples riding 2-up on.

That being said, it's ability to hold loaded sidecases, topcases, tankbags and such ranks right up there with the bigger and more expensive European brand adventure bikes. Plus, the KLR has the ground clearance to handle significant off-road demands, the suspension travel to handle the rocks & ruts atop a user-friendly chassis that allows you to move the bike around as you wish.

Engine & Transmission: "The Tractor!" I routinely had the term "tractor" running through my mind as this Kawasaki's single-cylinder powerplant pulled me up steep, twisting gravel switchbacks even at very low RPM's. My personal bike is still the BMW R1200GS Adventure, as one of the features I love so dearly about my bike is that low-RPM, tractor-like "grunt" that makes it feel like I'm on a conveyor belt that can be throttled when climbing hills. Often times a single-cylinder engine with such great low-end power doesn't offer much at highway speeds, but somehow Kawasaki made this 650cc engine a champion in that category as well, in that I never had a problem passing or climbing hills at high speeds. Of course the Kawi doesn't boast R1200GS-like power, but when I think of "adventure riding" I don't tend to think about how quickly I can finish the experience. - The transmission was likeable as well, although nothing really specific jumped out at me about it. There's a certain simplicity I do like, going back to a traditional cable clutch vs. the hydraulics I've been pulling on the BMW, even if it doesn't pull as smoothly.

Toughness & Durability: Now we're getting into the real "value" factor mentioned earlier, as  it's astonishing the overall durability of this motorcycle when compared to others that cost double or even triple what the KLR costs. (Now listed at $6,599 USD new online, my BMW is literally priced at more than 3 times that.) No, I'm not bragging that I ride such an expensive motorcycle; instead, this is more of a rant to those of you out there who are trying to live your adventure riding dreams on the smallest budget possible.

(In the spirit of the budget-minded KLR, we've even fitted the first group of them in Patagonia with a modestly priced, but very effective set of panniers made locally. As close to perfectly waterproof as any sidecases I've ever used, they're also not as brutally expenisve to replace if damaged, and are being sent out with these GIVI removable liners for simplicity shown right.)

The KLR 650 is used commonly by Police and Municipalites around the world, so in addition to the random rider's needs, access to parts and service is quite simple compared to other brands. With online forums like KLR 650.net and all the knowledge out there, riders that do encounter small problems typically won't have a problem resolving things themselves.

Oil Burner - Hey, what motorcycle doesn't burn a little bit, right? Some reports are out there about the KLR burning quite a bit more than average though, which makes me wonder about the high-mileage possibilities before a major overhaul is necessary. Of course it can be an inconvenience having to keep up with this when on your adventure ride, possibly carrying so much extra oil.

Suspension - Again, sort of a 'weak spot' I felt as the bike came originally from Kawasaki. Yes, I'm heavier than average, so perhaps that's part of why the suspension felt so 'dead' in certain situations. The word is out though that they've greatly improved the suspension on the 2014 model year, so let's hope that in that regard, this portion of this article is out of date soon.

THE BEST OF NORTHERN PATAGONIA TOUR Is One Route Where We Have KLR's Ready to Rent!

So in short, is the Kawasaki KLR 650 the coolest looking & sexiest adventure bike out there? Probably not, although it's not "ugly" in my opinion. Is the power of the KLR going to thrill riders as they pull wheelie's and rip powerslides going up mountain sides? Again, probably not. Is it one of the lowest cost adventure bikes out there? YES! As we continue to support riders who are trying to ride on the smallest budget possible, (like our Self-Guided Tours of Patagonia) I just thought the great value of the KLR 650 was worth pointing out. We now offer KLR's for rent in a few countries around the world, so please Contact Us about setting up your RIDE Adventures! 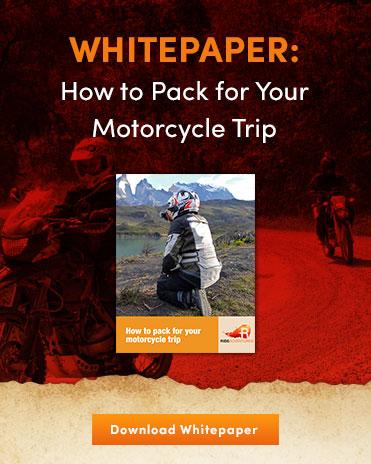