Have you ever taken a course or learned something that made you think, "wow...everyone should know about that"?

That thought is fresh in my mind, having just finished a weekend taking “A Crash Course for the Motorcyclist” & "Advanced Bystander Assistance" programs offered by Road Guardians in Big Bend, WI. Road Guardians is an international organization that I had merely heard about at a few motorcycle rallies previously. As it turns out, they have over 170 instructors worldwide, and have taught over 25,000 people what I'm calling; crucial information that we should all be trained on. Not just motorcycle riders, (although we in particular might be prone to injuries and danger.) I mean it...everyone should learn these "accident scene management" skills as we're all likely to come across a motorcycle rider or other person in need of help someday. Surely some of us already have.

I've had some training in First Aid, CPR, and some of the very basics of handling injuries stemming from motorcycle crashes, including my own. (I suffered a Grade 4 acromioclavicular separation or "separated shoulder" in 2007.) Of course I've also been present at numerous accident scenes now in the past 6 years since getting involved in the motorcycle touring business. Some key points I learned from this course (and there are many more) might seem obvious to some of us, but others who don't deal with these situations regularly might not know: 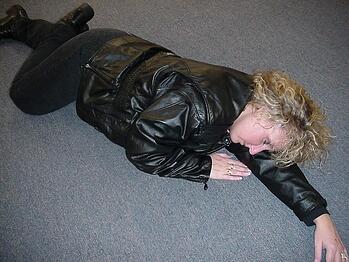 The "Puke & Drool" Position - Sounds funny, but it's actually an excellent position to keep an injured person in (as long as they are breathing) as such injuries can cause random vomiting and secretions that could, in turn, be choked on or inhaled if the victim was instead on their back. At least in this side lying position, the spine is straight and fluids will be out of the way.

Bandages & Gauze - After the initial sterile bandage is applied to an open and bleeding wound, it should not be removed or changed out for fresh ones until the injured person is in the hospital or with professional medical personnel. Why? Pulling away the bandage can also pull away a clot that is forming, thereby allowing blood to continue more freely again.

Eye Injuries - If a severe enough injury to someone eye means it should be covered, actually both the eyes should be covered. A person's eyes tend to move together simultaneously (obviously) and so if they were still using their 1 good eye, the other would continue to move and possibly be further damaged by the eyes moving around in unison. So if both eyes are covered, make a point to act as the injured person's eyes, as they will be frightened and you can help them relax by explaining what's going on around them.

Wait 20-30 Minutes! - We've all seen it before, and probably said the same thing ourselves numerous times after a crash: "I'm fine, let's go." Sound familiar? - Nobody wants to crash in the first place, as it can be as physically painful as it is embarrassing. Mistakes like crashes tend to temporarily inflate our egos to the point that we deny real pain and physical injury in the first place, not to mention that a state of shock can only further mask the pain. - What does all this mean? We should stop each other from just riding off just minutes after a crash, and instead make a point to slow down, do a thorough check of our motorcycles, and really wait to see if some delayed effects of a crash might be setting in. Even 20-30 minutes after a serious crash, riders can have changes in heart rate, unstable bleeding, and other physical or mental concerns that might not have been evident in the few minutes after the incident. Riding when we're not in a condition to do so ... well ... I hope I don't need to explain what that can lead to.

Easy to Remember Acronyms: PACT helps you remember what to do first: Prevent Further Injury, Assess the Situation, Contact the EMS and Treat the injured. The ABCSS of Trauma help to prioritize treatment: Airway (Jaw Thrust), Breathing, Circulation (bleeding you can see), Shock (bleeding you can’t see) and Spinal Immobilization.

Bottom line, folks: Take a course like “A Crash Course for the Motorcyclist” and if you can dedicate two days to training, take "Advanced Bystander Assistance" offered by Road Guardians (AKA: Accident Scene Management) and make sure you're better prepared to deal with these situations when they occur. These courses are now offered worldwide by a team of Certified Instructors who are motorcyclists and not only enjoy teaching, but do so with the understanding that in the end, they’re helping people. Whether it's out riding with friends or just passing by any unfortunate incident where someone was hurt, you'll thank yourself for the time you've invested in such education, and I'll be willing to bet that someone else out there will thank you as well.