When riding through Peru, should you fly over the Nazca lines?

Another famous point of interest for motorcycle riders riding through Peru is the Lineas de Nazca (Nazca Lines) just a few minutes north of the town of Nazca itself.

Created by the Nazca people between 400 and 650 AD, the lines were created by carving away red pebbles inherent to the land to reveal the white stone underneath.  Most of these carvings are of birds, mammals, fish, and human figures, and can be over 600 feet wide.  Because they are on flat ground and so large, viewing of the Nazca lines is best done from airplane overhead.

However, before choosing a tour operator or flight service to take you out over the lines, we strongly encourage you to do your research and confirm their current certification and status with the Peru Ministry of Transport. (As of now, the site only appears to be in Spanish.) There have indeed been quite a few plane crashes and fatalities during flights over the Nazca Lines in recent years, some reports showing that 68% of the planes flying do not meet the Ministry of Transport’s standards (what’s puzzling is that they are still allowed to fly.) 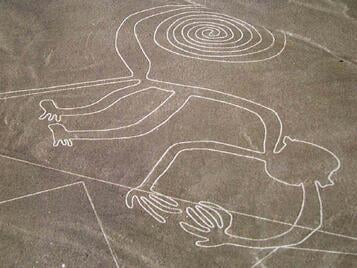 Truth be told, reports from tourists having actually experienced the Nazca Lines are not entirely positive these days either.  Over the years the Nazca Lines have been trampled by enough vehicles, people, and weather that the clear photos you might have seen are not an accurate portrayal of the lines as they are today.  During your flight overhead, it might be difficult to decipher the original formations made over 1500 years ago, and in most cases the photos you’ve seen are either quite old, or photo-shopped to eliminate the tire tracks and decay.

If this article weakens your desire to see the Nazca Lines, don’t let that change your plans for riding through the rest of southern Peru.  The ride from Nazca to Cusco is absolutely beautiful, and Cusco itself is the gateway to Machu Picchu!  In general though, don't hesitate to enjoy motorcycle rentals in Peru but please be aware of the safety issues surrounding flights.