The Best (and Worst) Times to Be Standing on a Motorcycle

There’s an old adage out there often repeated by motorcycle riders and (sadly) even a handful of off-road riding schools about standing on a motorcycle that says “If you’re off pavement, you should be on your feet.

In this article, we’re going to discuss why that’s not the “hard-and-fast” rule that it’s often made out to be.

More of a visual learner? We did a video on the subject

As anyone who has tackled our eighteen-day Patagonia tour will tell you, conserving energy is a big part of riding multiple back-to-back days in the dirt, and trying to ride every unpaved mile in the standing position wastes energy that you’ll wish you’d saved when the terrain gets rough.

When You Should Be Standing On A Motorcycle

Differing opinions aside, there are some definite advantages that come along with knowing when to get up off the saddle. Let’s take a look at some of the most common reasons you should find yourself standing on your motorcycle.

Standing Allows You to See Obstacles Ahead

Always take your speed and terrain into consideration when choosing whether or not standing on a motorcycle will provide an advantage. 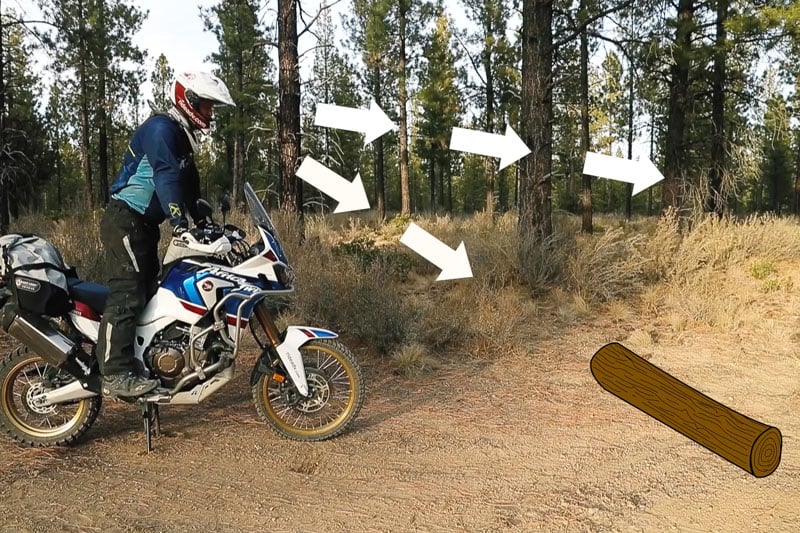 When you’re riding off-pavement, especially in slower situations involving large rocks and branches, being able to see what is directly in front of you can become much more important than knowing what’s coming up on the horizon.

Standing will give you a better angle/line of sight to observe and adjust for upcoming obstacles.

Standing On Your Motorcycle Can Provide Greater Balance

Standing can provide a greater feeling of balance, agility, and neutrality when riding.

You’re free to move your weight around on the bike from a standing position, and the bike is free to move around under you, which can be essential for maintaining traction on non-paved surfaces.

Standing can leave you better prepared to shift your weight as you roll over a big obstacle or go to brake on a steep hill, whereas attempting either of these scenarios from a seated position could end up with you being bucked off the seat or coming over the handlebars.

Standing “Adds Suspension” To Your Motorcycle

Whether you’re taking an obstacle at speed or trying to see how your big R1200GS handles in mid-air, the bend in your knees and elbows effectively  provides “additional suspension” when you reach the bottom of your bike’s suspension travel.

Even if you aren’t pushing the bike to the limits of its suspension, riding at speed over terrain like bumpy dirt roads for extended periods can be jarring on even the plushest Ohlins setup, so standing can also be an attractive alternative if you don’t enjoy having your ass spanked aggressively by your seat for miles on end. No judgments from us if you do, of course.

Standing on a Motorcycle Allows You to Stretch your Legs

For anyone that has done long miles on or off pavement, this one is a no-brainer.

After a few non-stop hours in the saddle, your legs and butt may be begging for a break, and standing up for a stretch provides some relief without having to make a stop.

We’ve all seen many a routine that splits foot time between the main pegs, the passenger pegs, the highway pegs, and even the gas tank to get some feeling back below the waist, but no motorcycle stretching regimen is complete without the all-important standing stretch.

Standing On Your Motorcycle Help You Cool Off

Big touring bikes like the Africa Twin and KTM Super Adventure come with tall windscreens to reduce wind fatigue on our bodies during long stretches of pavement.

And while we love our windshields, they can be a trade-off when dual-sport riding as they often translate to little or no airflow when the temps are high and the riding gets more physically demanding (Read: Sweaty) on low-speed technical sections of terrain.

Standing up into the airflow above your windshield can be a godsend on long, hot days when some extra airflow into your helmet and jacket is a welcome addition. 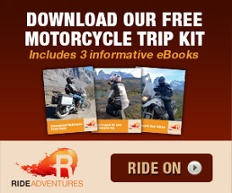 Why Standing on a Motorcycle Isn’t Always The Best Option

As we stated before, just because the pavement runs out beneath you doesn’t mean it’s time to stand up and stay that way. 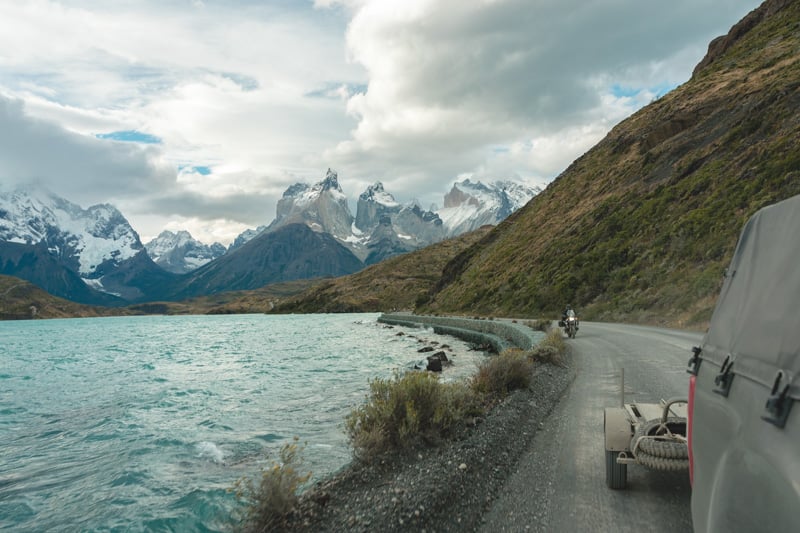 Let’s take a look at a few of the reasons why being seated off-road can be the smarter choice.

Standing on a Motorcycle Can Lead to Imbalance

Directly contrary to what we said above, the same neutrality that leads to greater balance in some situations can lead to imbalance in others: Riding through tough ruts in the road, for instance, can be much more manageable at a low speed from a seated position, when gripping the bike with your legs and feet, adhering more to the bike.

The same goes for uphill sections that are both steep and technical, and can’t be conquered with momentum alone. Taking a seat and slowly creeping up the hill while able to walk her up (also called paddling) is a seated-only technique you’ll benefit from practicing.

When seated, you’re closer to the handlebars with a better, stronger angle of reach, and able to use more big muscle controlled movements with your chest and arm muscles than when standing on a motorcycle.

When standing on your pegs, your body is further from the bars and you typically have less control with your wrists bent at such an angle with your hands and arms below you. The same could be said for your levers and foot controls as well, although ideally, you should have all of your controls set up for the kind of riding you do the most.

Hard Braking is Even Harder When Standing on a Motorcycle

Because hard braking requires you to both keep the motorcycle stable and to resist the forces that want to throw you over the handlebars , having your body weight grounded low on the bike and having the maximum amount of leverage behind the bars are both important safety considerations that you sacrifice from a standing position. 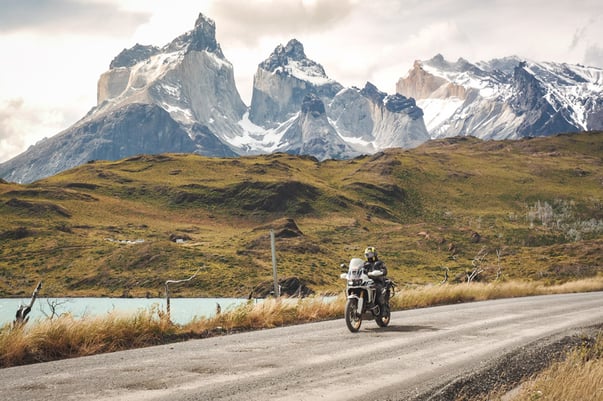 Although you’re able to move your body weight around the bike more freely from a standing position, you’re also raising your center of gravity, making the bike more likely to lift the rear wheel or lose traction completely under hard braking. Yes, having your butt off the seat can “add suspension” like we mentioned earlier, and adding suspension could improve your traction & contact with the ground; but we’re talking about some pretty precise cases here, where such traction improvements would outweigh the challenge of not throwing yourself over the handlebars.

Being firmly planted on the seat with both your legs and arms ready to provide maximum control over the machine is almost always the position you want to be in when you need to stop fast.

You’re Less Prepared to Eject When Standing on a Motorcycle

Similar to the hard braking scenario above, standing on a motorcycle will also impair your ability to eject from your motorcycle when braking can’t get the job done despite your best efforts.

Yes, the idea of intentionally ejecting from a motorcycle is the type of “get-off” that most of us want to avoid, but unlike your body, a motorcycle can always be repaired or replaced if a last ditch effort requires you to abandon ship.

Coming from the seated position, however, you’ve got the full bend of your legs to power you off the bike, and you’ll need as much spring as you can get if you’re behind a particularly tall windshield or handlebars.

Harder to Put Your Feet Down From A Standing Position

When riding through low speed, low traction scenarios like muddy roads or water crossings, the ability to quickly touch your foot to the ground to maintain balance (also called dabbing) can be crucial. 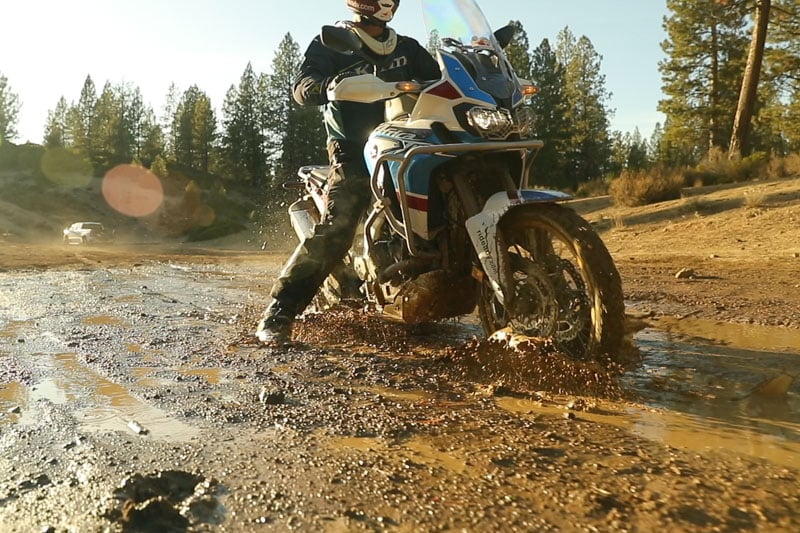 This is a fast reflexive skill that you likely won’t have time to do effectively if you have to take the time to drop down onto the seat first. In motorcycle riding, as with so many things in life, sometimes a half-second is everything.

When you’re out riding in wild places, the terrains and scenarios you will encounter are always changing, and the ideal body position will need to change with them.

Finding a good teacher or guide to learn from can be a valuable experience, but there’s no substitute for experience itself to learn best when you should be sitting or standing on your motorcycle in a given situation. 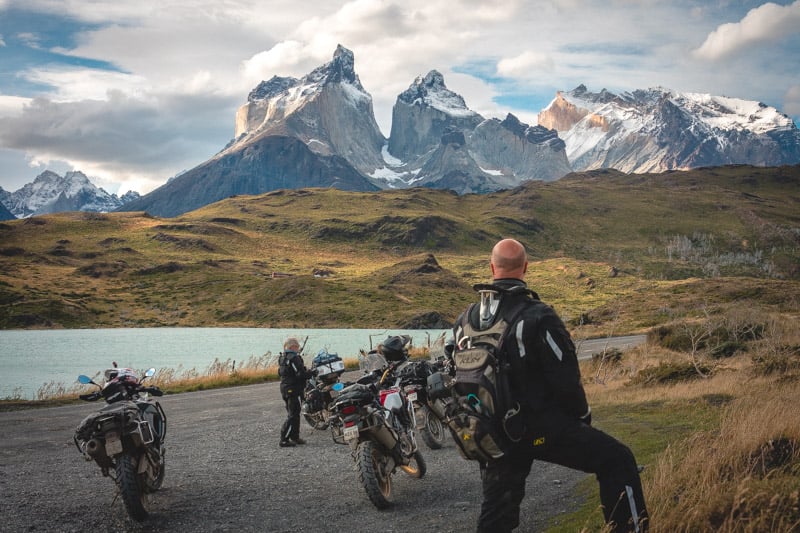 So what’s our top recommendation?

Take what you read here today and get out there and experience it for yourself.

That, and maybe skip the whole “eject” scenario if you can avoid it.